Scala - a JVM based language provides Actor based semantic.

Have open sourced our product - Paperstencil - cross between word processor and web form.

Wordprocessors such as "MS Word" are good for constructing documents. Web forms are good at validating and capturing user input. Meet "Paperstencil", a cross over product between Wordprocessor and Web form.

Posted by selvan at 7:17 PM No comments:

Posted by selvan at 3:32 AM No comments:

IP and assets of my first venture (xbrlware/bitstat) have been acquired by Frankfurt, Germany based financial services company, about a month ago. The acquisition process went smooth.

The acquisition brings logical end to my first venture. During our time in this venture,

Prior to acquisition, we were able to generate revenue from our product, but we couldn't grow at a pace that we had hoped for. Since then, we have started focusing on other opportunities.

This post details about how things went till now, in our attempt at creating a solution to solve digital divide among members of Indian families.

Brief about our solution :

In emerging economics like India, not all members of a family are equal in their capability to access technology, due to language barrier to access them, demanding tech skills to manage them. Since, members of a family live & work at different places/cities/geographies, there is friction in sharing & consuming digital content.

Our solution is mix of hardware + software.

How things went till now :

1) Go to market on our own : Since our solution involves hardware, we were in need of good  capital investment. Approached few VCs & had few rounds of discussion with them, but things didn't workout. Below is the feedback from one of the VCs (Other VCs feedback were also in similar lines)

"In general, any hardware based models have a lot of complications due to inventory management, support infrastructure, maintenance and so on. That is the reason, you don't see much o single hardware product companies any more (Apple, HP, Dell, Samsung, LG, MicroMax, Sony, etc. etc.). They all reuse their distribution, manufacturing, procurement, and maintenance network very well. If I were you, once you have a product, think through whether you can sell the product through Micromax or some one like that and you getting a royalty.

The question is not about the demand, but, how you satisfy the demand without reinventing the whole wheel. My 2 cents."

3) Approaching Intel : Again through friends, go an introduction to Intel capital. Intel is trying to market their atom processor and working with other hardware manufacturers. Demoed our solution to them. They were also working closely with same India based hardware manufacturer, that I approached early. Not much progress here too.

4) Approaching Reliance : Reliance jio infocomm (Owned by Mukesh ambanis's RIL. RIL pumped $5 billion in this project) is launching 4G based tablet tailored for Indian audience. Initiated discussion with connections I knew at RIL. Again here is too not much progress after few rounds of discussion. 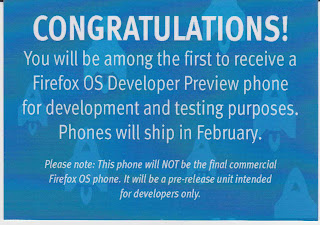 Have given demo oriented talk on Firefox mobile OS, at JSFoo - Bangalore 2012.  My talk was attended by around 60-80 members. Theme of my talk focused on introducing audience to Firefox mobile OS, creating FFx mobile applications using HTML, JS, CSS technologies.

Here is text-overview of my talk,

Android, iOS are 2 established mobile OS players in the Market. Windows 8 preview is available & Blackberry 10 are about to be released sometime next year. We also have Open WebOS from HP. FFx mobile OS is a new entrant to this space. In this session, I would be sharing my experience of what got me excited about FFx mobile OS & whats in there for web developers like you & me.

FFx mobile OS allows application to be created using JS, CSS, HTML. In fact, the only way we can create applications for FFx mobile OS, is using HTML technologies.

Both "system app" and "homescreen" are created using HTML technologies. 10000ft view of layout of index.html of "System app" will look like a) top "div" container holds code related to notification/pull-down menu b) bottom "div" container holds code related to keyboard (which is hidden by default) c) Middle "div" container act as place holder for "iframe" of apps being launched. When user launches an app, FFx OS creates an "iframe", loads the app in that "iframe" & place that "iframe" inside middle "div" container. "z-index" of recently launched apps "iframe" is kept higher than other launched apps "iframe", so that user sees apps that he launched recently. "z-index" management is completely abstracted from developers.

"helloworld" and "todo" apps are created for mouse click & keyboard based input system of desktops. But they worked as-it-is in touch based device. When user interacts with touch screen, touch driver generates event that contains a) cartesian coordinates of touch point, b) touch pressure c) touch area. These events reach gecko and gecko understands what component it rendered at the touch point and triggeres mouse click / keyboard event at DOM element corresponding to component at touch point.

FFx mobile has logical names to various components that we have discussed,


Here is presentation i used as supplement to my talk,